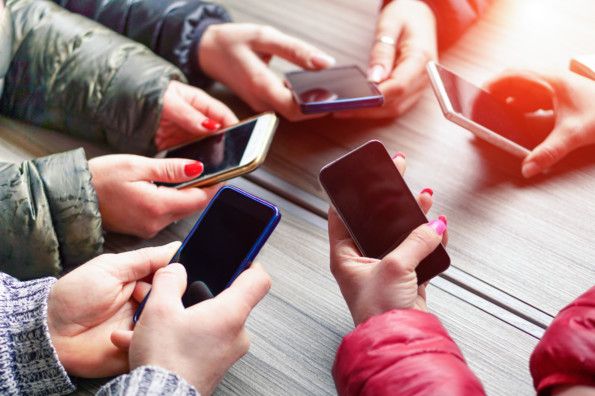 Are you addicted to your cell phone? Here are the telltale signs

• A one-year-old is given a cell phone by his mother, so he can watch a video and stop having a fit.

• An 11-year-old boy recently wanted to spend time alone in his bedroom, even though his grades in school have dropped.

• A 60-year-old motorist on the road can’t help but pick up the phone at every red light. He says he has to do it to check the messages and the cricket score.

• A family meets regularly for dinner and to watch an after-dinner TV show, but parents and children, ages 18 and 14, barely talk or watch the show as they are in their own kingdom on their cell phones. .

• A couple is on the verge of separation because the man refuses to put his phone away even in their intimate moments. On one occasion, the angry woman takes the phone from him and throws it far into the room.

These are not isolated cases. As psychologists in the United Arab Emirates will tell you, the problems of the patients they counsel reflect a global malaise.

“Call it phone addiction or whatever, it can just take over our lives if we’re not careful,” warns Dubai-based psychologist Dr Roghy McCarthy.

“Both adults and children these days work, communicate, eat, play and even sleep with their phones,” she says, noting that many of her patients don’t even realize that their phone addiction equals or borders on addiction.

According to Dr Sriram Raghavendran, specialist psychiatrist at NMC Royal Hospital, Dubai Investment Park, cell phone addiction is like any other addiction.

“The increase in screen time releases dopamine, the ‘pleasure’ hormone that literally kicks people a lot and makes them addicted to mobile. Therefore, you cannot have a gradual withdrawal. It requires complete and drastic reduction, with cold turkey withdrawal symptoms like any other addiction. “

He says very often that cell phone addiction is the manifestation of a deeper problem like depression, anxiety, loneliness or anger. “We have to find the root cause that led to the addiction. We can confront real mental health issues with professional help if needed. If the problem is deeper than just breaking a habit, the psychiatrist can arrange therapy sessions and provide medication.

Dr. Muhammad S. Tahir, director of the American Wellness Center and specialist in child, adolescent and adult psychiatry, says that nearly 60-70% of the cases he treats in adolescents are linked to mobile or internet addiction.

Dr Tahir said many parents do not recognize mobile addiction in children and complain of aggression, antisocial behavior or the child’s inability to get a good night’s sleep.

“When I examine the case in detail, I find that in most cases the root cause of these symptoms is having too many hours of screen exposure on a mobile phone. The child feels dissociated from his environment, gets lost in the world of moving images and feels annoyed when the device is taken away from him.

Dr Tahir says most kids spend at least three to four hours of unbridled time on the phone and when that is taken away from them, they exhibit a low level of frustration, aggression and an outburst of anger. However, when the child is handed the device, they immediately comply with it, calm down, and engage in it. “These are all confirmed signs of addiction. However, parents fail to recognize that this behavior is the fundamental symptom of some form of electronic device addiction or addiction, ”he added.

As psychologists point out, it’s not just about children, adults can be addicted too. And in most cases, the demands of the job are cited as the perfect excuse to justify undue time spent on the phone.

Samar Debs, human resources consultant for The Phillips Group, says phones in the workplace are a challenge.

“It’s getting harder and harder to tell if someone is using it for work or just for gaming on their cell phone,” she explains.

However, she says the opportunities outweigh the disadvantages when it comes to using phones in the workplace.

“WhatsApp can be a great team building tool as a less formal platform for sharing team videos and photos, having impromptu team meetings, or just informal banter among team members.” , especially since more and more organizations have employees working remotely. It’s also a good indicator for managers to sometimes predict if someone is about to quit by refusing to join the conversation on WhatsApp, ”she said.

According to her, many organizations use mobile applications to manage their operations. “For example, some food and beverage companies require restaurant managers to complete their daily checklists on a mobile app with the ability to upload photos of completed tasks. This provides a real-time perspective on how all of the many restaurants are doing at any given time. In addition, it is a real business platform with transactions and contracts signed on mobile applications.

Vishanti Coutancar, Founder of V Mai Stars HR Consultancy, says: “Most companies do not allow the use of personal cell phones during business hours, especially spending time on social media and websites for watch entertainment.

Coutancar says there are specific checks and balances to discourage employees’ personal screen time. “Several organizations use computer technologies such as firewalls and proxies to restrict access to social media websites in the workplace. “

Policies on the use of social media on phones also depend on the nature of the profession. “Some organizations allow the use of cell phones if they have to perform specific tasks. Most organizations clearly highlight their policies on these issues at the time of hiring. They ensure that all employees are aware of the cell phone use policy followed at work pace. If this policy is not followed, the immediate supervisor would arrange a counseling session with the employee and agree to a time to stop excessively using cell phones to receive calls or play games.

It specifies that in the event of non-compliance, a second warning letter and disciplinary measures such as a reduction in salary or loss of bonus are initiated. “If the employee is unable to wean and continues to break the rules, he or she is also at risk of losing their job,” she adds.

“Everything is based on applications these days”

But to what extent is it possible to ban cell phones for personal use in the office?

“We have seen many companies implement a policy to ban phones during training. This is a challenge because Gen Z and Millennials often use their phones to take notes. Managers need to be sure to educate themselves about what they are doing. What may sound like a rude text message to a friend in a meeting is often a good faith expression of interest in the manager’s advice and story, ”Samar explains.

Few people will dispute that the mobile phone today is like a double-edged sword. Perhaps the time we spend on our phones is a sign of the times. Forget about the entertainment, Dr Rima Sabban, Dubai-based sociologist, says: “Nowadays we use the phone for everything. Everything is driven by the applications. I use it myself to pay my bills, manage my calendar, read the news, take notes and much more. And you know what? The phone actually made my life easier.

Dr Sabban says the key is to use the device mindfully.

Dr Sabban says the key is to use the device mindfully. “The problem arises when you don’t know how to use the phone, for what and for how long? When we get it wrong, it becomes addictive. We must fix this problem before it is too late. This is especially important when it comes to children. We need to teach them where and when to draw the line.

Recognize the problem, solve it

When addiction is suspected, Dr Raghavendran says parents need to recognize the problem in themselves or their children to deal with it. He recommends drastic weaning from overuse of the phone through digital detox and substitution.

But the mistake families often make is to replace time spent on mobile with time spent in front of a screen.

“Finding a variety of substitute or substitute hobbies and not substituting one screen time for another is essential. For example, it will not be advisable to take the phone out and allow the child or adult to watch a movie on TV, in the theater or play an indoor game on the laptop, or listen to an electronic musical instrument. The replacement must be completely different to break this habit, ”he advises.

“In the case of adults, the time can be used for meaningful interaction between couples, an extended ‘time for me’ with the culture of value-added learning (can be a hobby like golfing, taking public speaking or something that can meet an individual’s self-actualization needs). With children, parents can introduce more stimulating outdoor play, greater interaction with friends and family with games socializing, going for walks, pursuing a hobby such as gardening, cooking or playing music that is deeply satisfying.