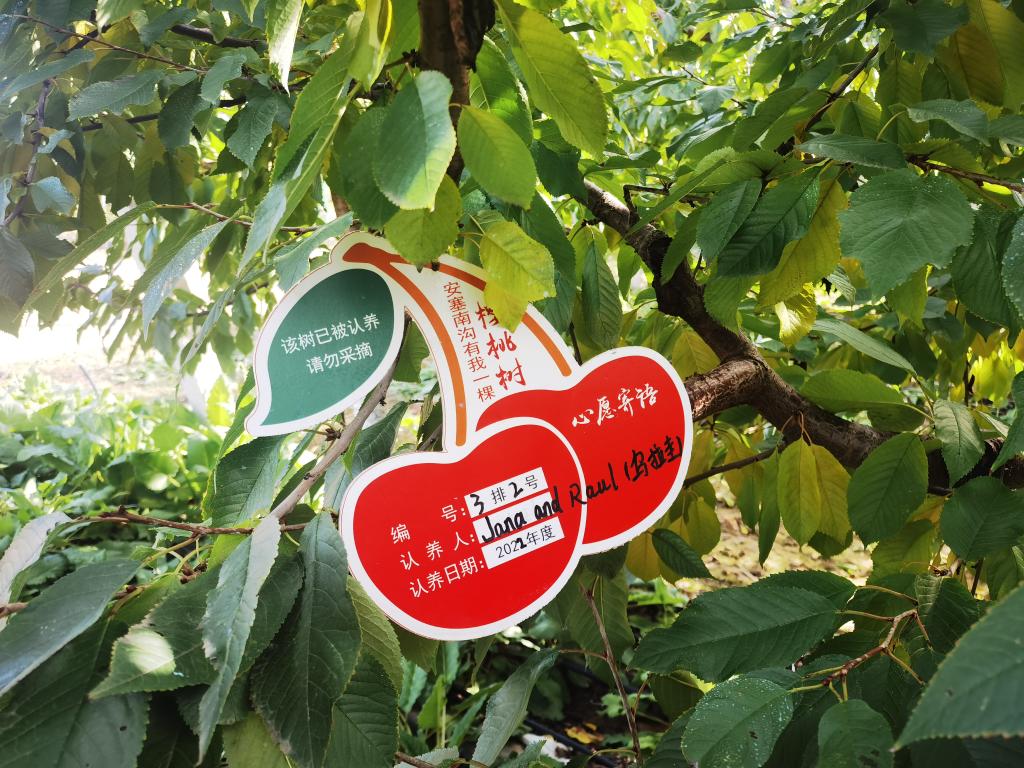 Photo provided by Zhang Guanghong, an official from Yan’an Village in northwest China’s Shaanxi Province, showing an adopted cherry tree and a tag with the names of its adopters on it in Nangou Village in Yan ‘an in October 2021. (Xinhua)

XI’AN, April 15 (Xinhua) — In early April, Zhang Guanghong, a village official in Yan’an, northwest China’s Shaanxi Province, participated in a live broadcast in a valley community to promote the adoption of cherry trees.

“As you can see, full bloom promises a bumper harvest. Wherever you are, you can adopt the trees and we will deliver fresh cherries carried by your trees to your home,” Zhang told viewers online.

Lately, with easier access to mobile internet, more and more farmers in the heart of China’s Loess Plateau, like Zhang, have started selling fruit to customers both at home and abroad. stranger using their phone.

Zhang, 41, still remembers how limited telecommunications were when he first arrived in Nangou village 11 years ago. “At that time, we had to make phone calls at the top of the hill to get a signal,” Zhang said.

Since 2014, locals have started cultivating apple and cherry trees in the mountainous area which has been expanded in recent years. Combined with improved communication infrastructure, Zhang came up with the idea of ​​showcasing the village’s beautiful scenery and selling agricultural products via live broadcast.

“These short videos stir up the fervor of many Internet users beyond the valley. Even customers from Uruguay, Spain and Singapore have chosen to adopt fruit trees here,” Zhang said, adding that distribution channels for various fruits have also grown online.

A similar scenario can be found in Guan Village, Yanchang County in Yan’an. In a demonstration area of ​​the Farm Adoption Service, more than 100 apple trees have been selected by adopters, who can watch live videos in the garden via a mini-program on WeChat.

According to locals, the combination of adoption services and live sales allows them to earn an additional 1 yuan per kilogram of apples.

“In addition, the authentic scenes of local cave houses become a unique attraction for customers,” said Wang Gang, who returned to his hometown of Yan’an to develop e-commerce six years ago.

According to Wang, during the peak season from September to the following February, he usually broadcasts live with his comrades, attracting more than 8,000 viewers each time.

“The popularity of mobile Internet offers farmers a lower threshold to apply new technologies in the development of their own businesses,” said Wei Yan’an, deputy mayor of Yan’an, also a long-time researcher on the rural e-commerce. ■