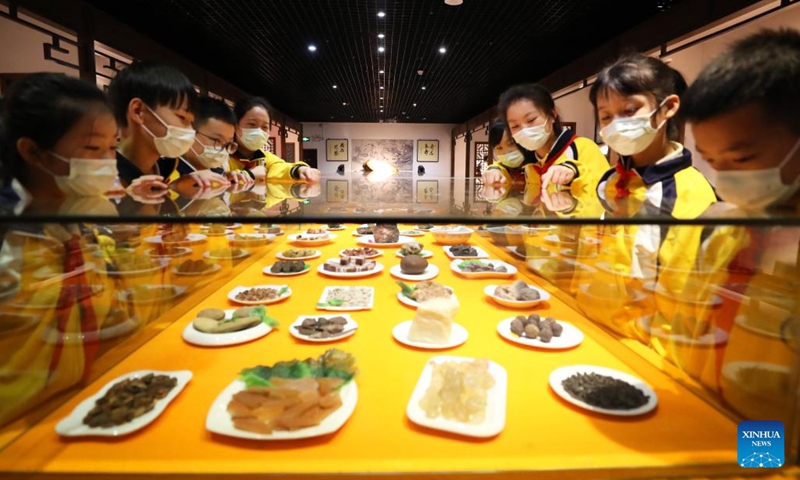 By Juan J. Nava On May 19, 2022
Share
Excitement was in the air at a special education school in northwest China’s Gansu province last week when a “mobile museum” visited the campus.

Students gathered in front of colorful signs placed in the schoolyard by the Gannan Tibetan Autonomous Prefecture Museum in Gansu, which displayed images of precious objects from the museum’s collection.

Chen Bingren, head of the museum’s display department, was the one-day exhibition curator. With more than 20 years working in the museum industry, this was Chen’s first time leading a tour for children with disabilities.

Gannan Special Education School currently has 158 students, including children with hearing impairments, learning disabilities and autism. Although many of them struggled to speak, the curiosity in their sparkling eyes showed that they had a lot to say.

With the help of a sign language teacher at school, the discussion between Chen and the students went smoothly.

“What kind of pattern do you see here? Chen asked, pointing to the picture of an old pot on the board.

The children brought their wrists together, closing and opening their palms repeatedly, to simulate a frog’s mouth, as their way of describing the frog-like design.

Huang Baoping, an eighth grade student at the school with hearing impairment, has a passion for drawing. As an avid art lover, he was enthused for days after discovering the exhibit.

Following closely behind Chen and the sign language teacher, Huang kept asking questions such as “What are the pictures on the pottery pieces?” and “Why did the ancients draw things like that?”

Later, he frequents a pottery workshop which is part of the exhibition program. Huang made a lotus flower, because Chen told him that ancient people in China liked to compare lotus flowers to people with noble characters.

Chen was amazed by the children’s perception of art. “We prepared three models for them to imitate, but many children, like Huang, created creative works based on their own preferences and understanding of things,” Chen said.

For example, the Gannan Museum, opened in 1986, has seen its attendance multiply to around 60,000 per year. Of these, around 50% come from online exhibitions or exhibitions organized outside the museum.

Since the museum staff packed up the boards at the end of the day, the children didn’t want them to leave. “When will you come back?” some of them asked.

Ma Yujiao, a teacher at the school, said they had organized visits to local museums in the past, but an exhibition held at the school was different.

“Museums carry out the important functions of history and art education and cultural heritage, so we have the important mission of spreading the power of museums to a wider audience,” Chen said.