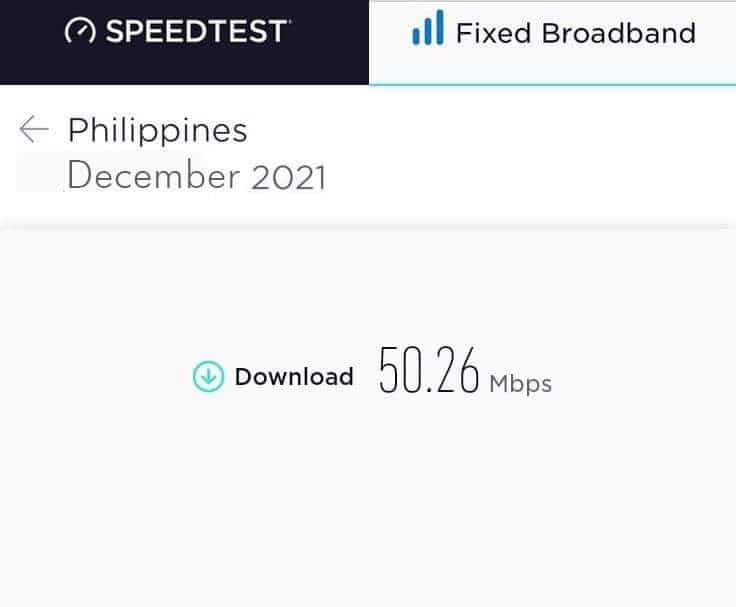 The Ookla Speedtest Global Index report, now based on median rather than average download speed, showed increases in fixed and mobile broadband download speeds for the Philippines in December. The country’s fixed broadband speed improved to 50.26 Mbps from the 46.44 Mbps recorded the previous month.

The latest download speed signifies an 8.22% increase month over month and a 9 notch improvement in the global fixed broadband ranking. The speed represents a 535.40% improvement since the start of the Duterte administration in July 2016.

Mobile speed also increased, with the country hitting a download speed of 19.20 Mbps from 18.68 Mbps the previous month. The latest download speed means a 2.78% month-over-month increase in speed for mobile. The speed represents a 158.07% improvement since the start of the Duterte administration in July 2016.

Fixed broadband speed in the Philippines now ranks 63rd out of 178 countries, while mobile speed ranks 89th out of 138 countries. The President’s announcement to streamline and expedite the issuance of LGU permits in July 2020 generated a significant increase in permits granted to telecom operators from July 2020 to October this year compared to 2019. The speed improvement is widely attributed to this development as telecom operators are able to accelerate the construction of infrastructure (cellular towers and fiber optic network) needed to improve services and connectivity.

Refining his data, Ookla explained that the median is a metric that captures the typical user experience and that presenting the median download speed best reflects the speeds a user is likely to achieve on a market. In statistical terms, the median was less likely to be influenced by outliers than the mean.

Telecoms: CAMTEL is getting closer to the official launch of its mobile service