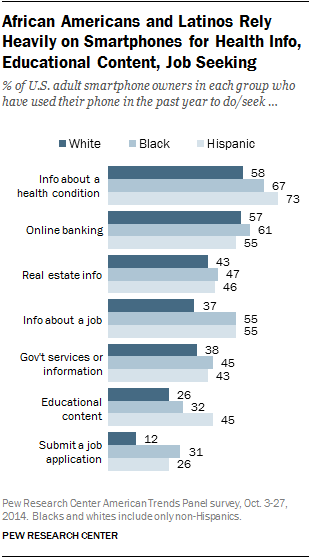 Racial and ethnic differences in the way people use mobile technology

For many years, researchers have studied the “digital divide” by examining the gap between those who have access to digital and those who do not. But as these gaps have narrowed over time, another set of contrasts have emerged in how different demographic groups are using technology.

Although whites, blacks and Hispanics have similar rates of smartphone ownership, minorities tend to rely more on their phones for internet access, according to the recent Pew Research Center report on smartphone adoption. Some 13% of Hispanics and 12% of Blacks are smartphone dependent, which means they don’t have a high-speed connection at home and have few options for getting connected outside of their cell phones. In comparison, only 4% of white smartphone owners rely heavily on their cellphones for online access.

Almost three-quarters (73%) of Hispanic smartphone owners have used their phones in the past year to check for a health issue, which is similar to the share of blacks. But whites are less likely to say they have used a phone to research health information.

Mobile education is a more important part of the smartphone experience for Hispanics – 45% of Hispanic smartphone owners have used their mobile device to take an online course or search for educational content in the past year. This share is 32% for blacks and only 26% for whites.

Although smartphone owners were not asked Why they pick up their phones to access certain information or services, some advocacy groups suggest that mobile technology can help reduce health disparities for minorities by allowing access to information that might not necessarily be readily available to them, while additional research shows how important digital technology is in the job search process for blacks.

Monique Anderson is Associate Director of Research at the Pew Research Center.