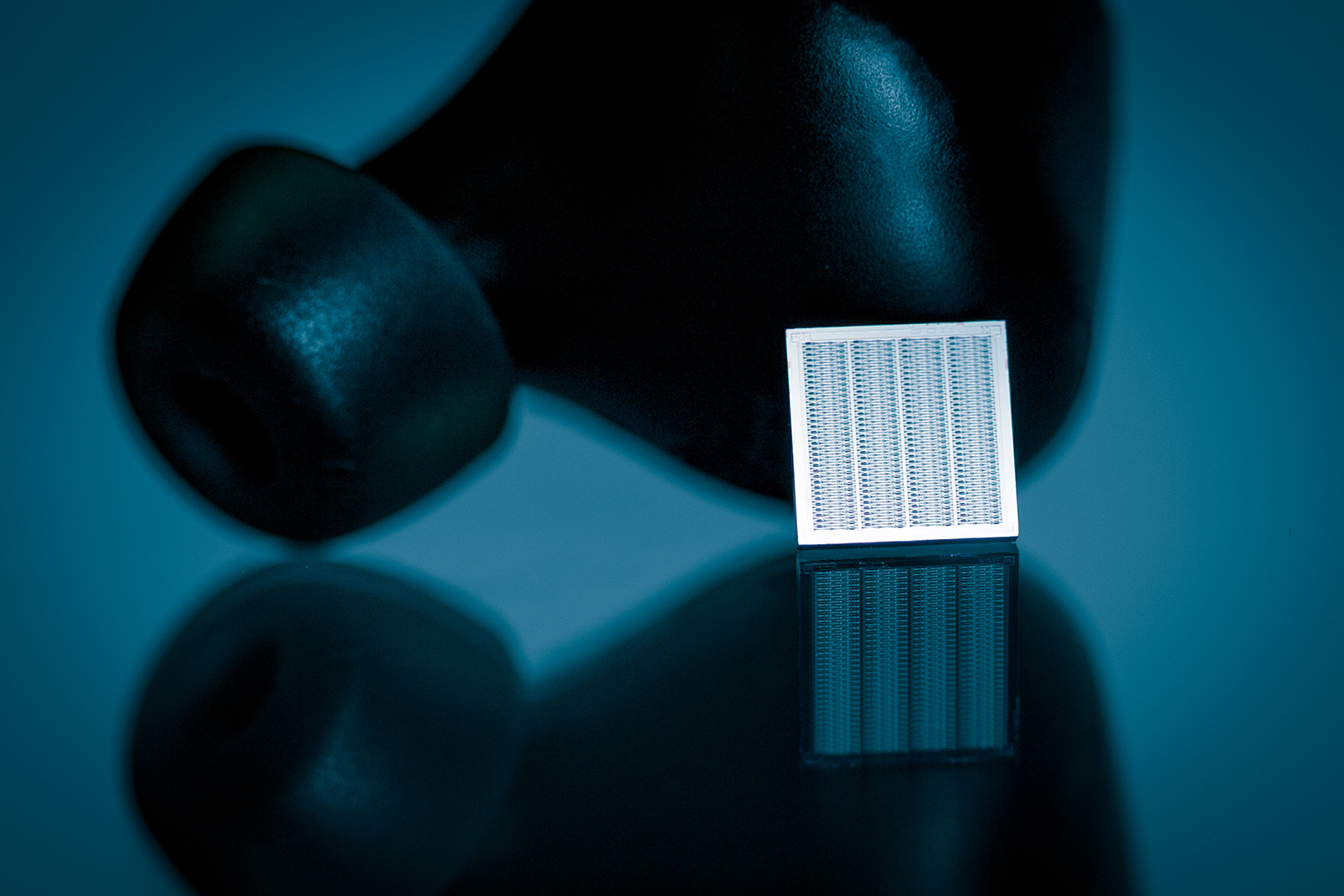 The future of mobile internet lies in silicon micro-speakers

The micro-speakers for wireless in-ear headphones from Arioso Systems GmbH, a spin-off company of the Fraunhofer Institute for IPMS Photonic Microsystems, are up to ten times smaller than conventional micro-speakers and are made entirely from silicon. Currently at the prototype stage, energy-efficient MEMS loudspeakers could in the future play a role in expanding the range of functions offered by miniaturized headsets, such as instant translations and monitoring functions. health. This is made possible by an innovative sound transducer principle that dispenses with the diaphragm, the central element of a conventional loudspeaker, writes Fraunhofer Gesellschaft in a press release.

Wireless in-ear headphones are all the rage and are the perfect companion when you’re on the go. However, they’re still relatively large, and many of their components quickly drain battery power, limiting internet connectivity, payment functions, and other smart features. The new smart functions require a lot of computing power and therefore a lot of space and electricity. The speakers currently available are too large. The largest components of the new wireless headphones are the battery and the microphone speaker. In contrast, Arioso Systems GmbH micro-speakers are only 10 to 20mm in size.2, which makes them ideal for future audible applications, such as simultaneous translation, payment functions and other voice-based internet services. The Dresden-based Fraunhofer IPMS spin-off was founded in 2019 and today has 12 employees.

Sound is generated inside the silicon chip

Unlike conventional loudspeakers and the few other micro-electromechanical system (MEMS) loudspeakers out there, Arioso Systems’ tiny MEMS loudspeakers do not contain membranes or magnets, and are made entirely of silicon. They can be cost-effectively mass-produced using standard CMOS processes, making them easy to scale for the mass market – an advantage over competing technologies that currently use piezoelectric materials. , which makes the production process more complicated and expensive.

Your Weekly Innovation Snapshot Every Sunday, the best articles of the week are delivered to your inbox.

The speakers use a new principle of energy efficient sound transducer. This is based on Nanoscopic Electrostatic Drive (NED) technology, which was developed by Holger Conrad – a founding member of Arioso Systems GmbH – during his time at Fraunhofer IPMS. Unlike conventional speakers, the new MEMS sound transducer does not have a membrane. It was replaced by a large number of thin bending beams, each measuring 20 µm, contained in the silicon chip. Through the openings at the top and bottom of the chip, air escapes from the chambers and flows into the chambers where the electrostatic actuators move. Applying audio signal voltage causes these NED actuators to flex. The vibrations are then heard in the form of sound. “The lamella-like flexion bundles move toward each other and push air up and down, causing audible pressure fluctuations in the ear. In principle, the eardrum is moved directly like with an air pump, ”explains Dr Jan Blochwitz-Nimoth, Arioso’s chief financial officer.

As the components can be integrated directly into the silicon chip, they take up little space and are much more energy efficient than conventional speakers. The technology uses less battery, extending battery life by several hours. “The sound is generated inside the silicon chip. The fact that there are no external moving parts such as membranes frees up space and reduces the number of assembly steps in the production process ”, says Arioso CEO Dr Hermann Schenk, pointing to a MEMS speaker USP. “The thin strips inside the chip are moved by applying an electrical voltage. This generates a sound pressure level of approximately 120 dB with optimum sound quality on a chip area of ​​only 10 mm².

Alexa in your ear

In the future, it will be possible to use the space that is saved in the wireless headset by the high degree of miniaturization and energy efficiency of MEMS speakers for other Internet applications such as payment services. or instant translations. It’s also possible for users to control functions related to their body – all via voice control, without them having to look at their smartphones. With this in mind, Arioso Systems GmbH directs its development towards the needs of large OEMs and Internet service providers in particular. The innovative acoustic transducer principle is also suitable for use in hearing aids.

The funding round has been closed and the spin-off has so far received 2.6 million euros from investors. Over the next two to three years, prototypes of MEMS micro-speakers are expected to move from the laboratory scale to the pilot scale. Arioso Systems is already in discussions with investors for the next round of funding, which aims to acquire venture capital of approx. 10 million euros. “We own the exclusive rights to commercialize the NED technology from Fraunhofer IPMS. Over the next few years, we strive to become the market leaders in MEMS speaker technology for the world of mobile audio, ”says Dr Hermann Schenk, explaining the ambitious goal of the company.

Also interesting: See the sound at the GLOW festival

Powered by UPI and QRs, mobile phone transactions are booming in India, according to Worldline report

Mobile Internet, data services will be banned with immediate effect