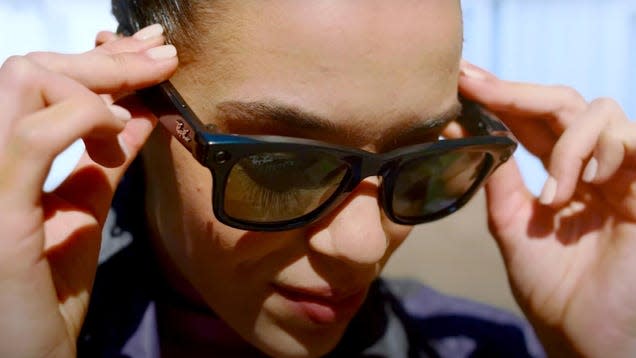 The blurry outlines of the next phase of mobile computing finally resolve into a clear image of a landscape populated by smart glasses.

Of course, not everyone can see it yet. The fact that smart glasses come in so many different varieties – sometimes even confused with virtual reality (VR) headsets – has only added to the struggle for some to seize these devices as a new mobile platform. .

But as these devices gradually expand beyond early adopters and begin to populate the faces of casual mainstream users, the usefulness of smart glasses will become more evident.

Most smart glasses fall into a few categories:

The last two examples are generally referred to as augmented reality (AR) computer interfaces. And their sales should take off next year.

Connecting to the cloud is only half the battle

Powered by competing layers of cloud computing tied to wireless networks, mobile computing will soon no longer be exemplified by a person staring at their smartphone.

There are already a number of smart glasses and augmented reality advancements in China, South Korea, and Israel, to name a few. But until the lens display and battery technology catch up with their ambitions, most tech companies have largely focused on simpler, smartphone-assisted designs.

Here’s an overview of the various devices already available for sale to the general public in the US (a key market to indicate mainstream viability), as well as what to expect from the most anticipated potential new entrants in the category.

Amazon’s first dive into hardware began with the Kindle ebook reader in 2007 and has since extended to everything from smart speakers to interactive video displays. Like the Kindle, Amazon’s Echo Frames ($249), which launched in 2019, connect the user to the company’s wide range of content and cloud-based e-commerce services.

The innovation in this case is that Echo Frames allow the wearer to interact with Amazon’s Alexa digital assistant using voice commands. Equipped with microphones and open earphones (essentially speakers that most other people nearby can’t hear), the slim and normal frames can be modified with corrective lenses and allow the wearer to listen to music , podcasts, take calls , and send verbal messages. In case the user’s environment is too noisy for voice interactions, the frames also have a touchscreen on the arm that can be used to control functions.

So far, they only come in one frame shape and a few different colors, as well as a sunglasses variant. Offerings from audio giant Bose (Bose Frames) and gaming Razer (Razer Anzu) may offer slightly better designs and are competitive in some feature categories, but the tight integration with Amazon’s voice assistant and various cloud services gives Echo Frames a clear advantage in this category. .

Focus: Amazon hasn’t released a significant update to its Echo Frames product in a while, but based on its consistent updates to other Echo hardware products, there’s a good chance an update is coming. next year.

The Ray-Ban Stories frames ($300) are by far the hottest smart glasses on the market because, along with a few other design options, they use the classic Wayfarer frame made famous by movie icons like James Dean and Tom Cruise. The device, which is the result of a partnership between the Facebook division of Meta and Ray-Ban (part of the EssilorLuxottica group), allows the user to take still photos and videos (up to one minute ) via a barely noticeable front camera.

Like Amazon’s Echo Frames, Ray-Ban Stories connects to the user’s smartphone via Bluetooth, where a dedicated app offers control over privacy features, photo and video sharing, and even voice type. that the Facebook assistant (triggered by the wearer’s voice) uses to respond to the wearer.

If there’s one key lesson Google Glass has taught the smartglasses industry since its 2013 release and subsequent downfall, it’s that people want to know when they’re being recorded or photographed by smartglasses. To this end, Ray-Ban Stories has a small LED light that lights up when the user is recording a video or taking a photo.

The LED notification feature was pioneered by Snap through its Spectacles smart glasses. But incorporating such functionality into a pair of classic Wayfarer frames is part of the reason the Ray-Ban device may have the best chance of any competitor going fully mainstream, as the frames are almost completely indistinguishable from a pair of normal Wayfarers.

Focus: Meta has a fully AR-enabled device in development called Project Aria that could eventually be released as a successor to its Ray-Ban Stories product.

Snap was one of the first to join the smart glasses race, but its real challenge is scale

Although most social media users know Snap for its Snapchat app, the company is also notable for being among the first to release a pair of (somewhat) smart glasses fully tailored to the general public. The first generation of Spectacles camera glasses, introduced in 2016, initially had all the buzz of a new Apple product, with sales kiosks popping up in the US. But eventually, the excitement died down.

Even in Spectacles’ first bustling year, the device only sold around 150,000 units. Since then, it is quite rare to see a pair of Spectacles in the street. But that hasn’t stopped Snap from continuing to improve the device and release new frame styles and features. Spectacles 3 ($380), which launched in 2019, was the first version of the device that combined the frame’s video capture capability with 3D depth capture and post-recording AR features. They were not enough AR smart glasses, but come close.

It wasn’t until 2021 that Snap released its first truly AR-enabled smart glasses, loosely called New Spectacles. Sporting a design similar to Balenciaga’s LED frames made popular by Kanye West, the New Spectacles not only display fully animated 3D content, they also offer hand tracking, allowing the wearer to interact with and control the content. virtual in the same way it would with larger high-end AR headsets like Microsoft’s HoloLens 2 and Magic Leap 2.

Unfortunately, the device is not for sale as the company continues to refine the various features of the product. But a select group of third-party Snapchat developers have been allowed to use New Spectacles to develop apps for what could be a large release in the future.

Focus: Although Snapchat has 332 million users, this number is far below the billions of people using Amazon and Facebook software. So while Snap was first in the smart glasses race among the three, and offers some of the most advanced computer vision research and applications, the smaller scale of its platform will make it difficult to compete with larger platforms as adoption of smart glasses takes off.

AR allows us to express ourselves more fully

All of this activity on the consumer smartglasses front is why so many tech industry analysts and watchers are so focused on the increasingly credible rumors that Apple has a smartglasses device in the works. road. While Amazon lacks high-end styling and Facebook struggles with public trust around personal data, Apple has generally returned positive ratings on both, as well as the massive roughly half-a-billion scale. App Store weekly users.

The other Big Tech brand set to enter the fray is Google, which bought Canadian smartglasses start-up North in 2020. Prior to the deal, North introduced its own sleekly designed pair of smartglasses with audio features , as well as 2D text and notification content. displayed to the bearer.

Since the acquisition, Google has ramped up hiring for its AR hardware and software units, sparking speculation that North’s Focals smartglasses could reappear as a Google product, leveraging the full functionality of the giant’s search and maps services. of technology. The device, reportedly codenamed Project Iris, could be available in 2024, shortly after Apple is expected to launch its AR wearable.

What all of this means is that the often vague concept of the Metaverse will come to fruition in 2023, when the AR wearable face wars really heat up.