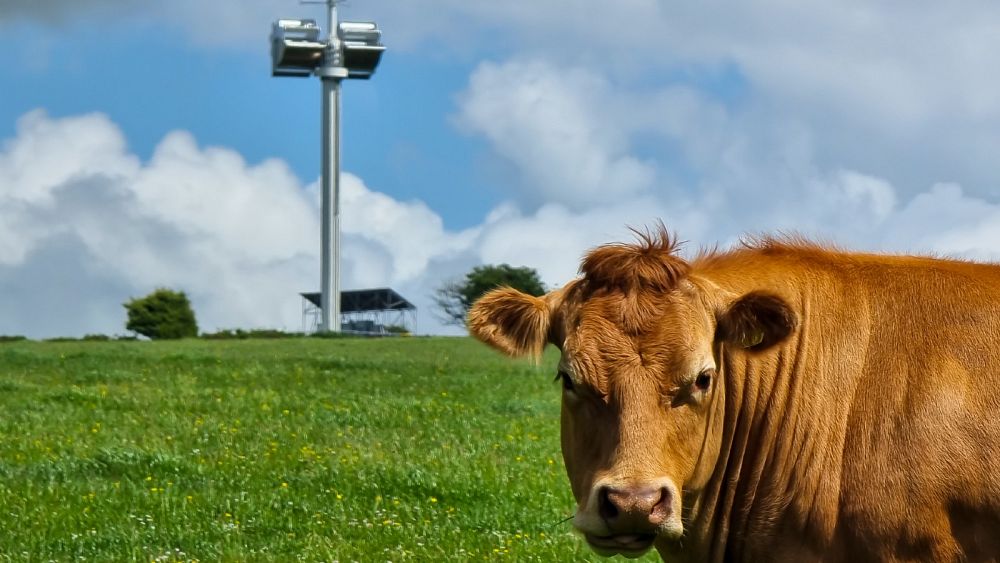 Vodafone has lit the UK’s first self-powered mobile phone mast, to see if it could be the answer to providing coverage in remote areas while reducing the company’s carbon footprint.

The mast, featuring solar panels and a turbine to harvest renewable energy from the sun and wind, is designed to operate off the power grid, serving areas traditionally hard to reach by mobile service providers.

The two-year trial, conducted in the community of Eglwyswrw in Wales, aims to “ensure that we can supply electricity to this site most of the time”, said Suki Gilliland, Senior Energy Manager at Vodafone UK.

“The outcome of the trial will then be to understand what we need to do in terms of renewable electricity supply, renewable technology and other technological innovations to provide a fully off-grid solution,” she told Euronews Next.

The mast uses a wind turbine made by Crossflow Energy, which generates power even in light winds. It can be installed without the need to lay electrical cables, which Vodafone says reduces its impact on the local environment and its maintenance requirements.

The mast being tested at Eglwyswrw will be connected to the network as a backup, to ensure the community continues to get their coverage, Gilliland said.

Before resorting to using grid power, however, it will first be powered by the turbine, and in times when there is no wind power, a battery charged with excess power will be triggered.

The company says the masts will help it reduce carbon emissions and reach its goal of net zero operations in the UK by 2027.

Vodafone hasn’t said how many self-powered masts it plans to build if the test is successful, but says it could be part of the solution to achieving coverage across 95 per cent of the UK’s landmass, a target government and industry. .

The team will collect data during the two-year trial and optimize the technology while determining the most suitable sites for the masts, given the wind requirements to power them.

Similar trials have begun elsewhere in Europe, with Ericsson and Deutsche Telekom using wind and solar to power a 5G mobile site in Germany.

This is necessitated in part by soaring electricity costs, but these companies are also trying to find ways to ensure reliable, low-carbon power for their power-hungry sites.

“The energy costs for our sector are around $25 billion (€24 billion) per year, probably closer to $30 billion (€28.8 billion), at current energy prices. “, told Reuters Mats Pellbäck Scharp, head of sustainable development at Ericsson.

Ericsson said the 5 kilowatt wind turbine and solar modules could theoretically power the entire site in Dittenheim, about 193 km north of Munich in the state of Bavaria.

Twelve square meters of solar panels have already been in operation for a year, providing around 10% of the energy needed.