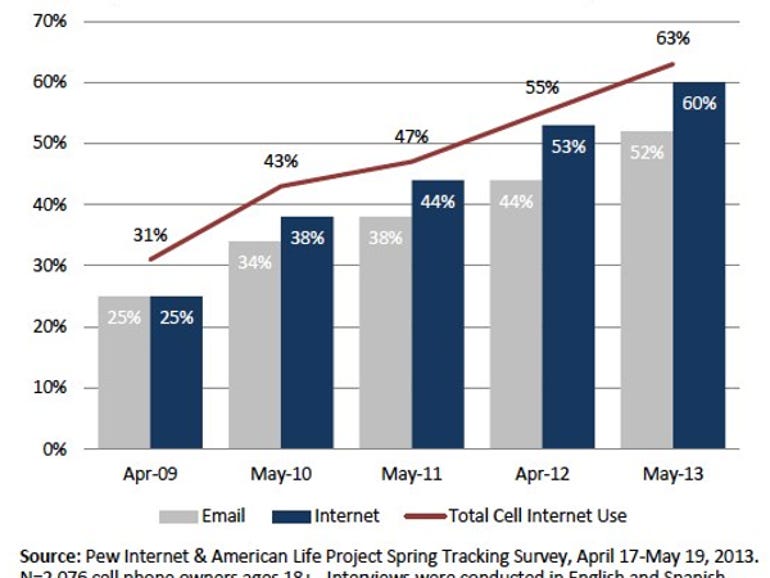 Once upon a time, in 2007 to be exact, if you wanted to use the web on your phone, you only had access to a limited subset via the Wireless Application Protocol (WAP) (PDF). Then came the iPhone and 4G, bringing us smartphones and broadband, and six years later, 21% of smartphone users use their phone, not their PC or tablet, as their primary means of accessing Internet.

To be specific, a Pew Research Center Internet and American Life Project survey found that “Almost two-thirds (63%) of cellphone owners now use their phone to get online. That’s twice as many as those who have used their phone to go on the web in 2009,” the survey noted:

A third of these mobile internet users (34%) primarily use their phone to access the internet, as opposed to other devices like a desktop, laptop or tablet. We call these people “mobile-predominant Internet users,” and they make up 21% of the total population of cellphone owners. Young adults, non-whites, and those with relatively low incomes and education levels are particularly likely to be primarily cellular Internet users.

At the same time, Pew found that internet usage on smartphones has increased since April 2012. This includes college graduates and financially well-off people. “Notably, cellphone owners between the ages of 50 and 64 have seen an above-average increase of 15 percentage points over the past year. Some 51% of cellphone owners aged 50-64 now use their phone to get online, up from 36% previously. who did it in the spring of 2012.”

Take-out? You really, really need
make sure your website is mobile friendly

. If you don’t, you will have alienated up to a fifth of your potential audience.